His Holiness Bhanu Swami Maharaja was born in Canada on the 26th December 1948 to the most fortunate Japanese parents. HH Bhanu Swami Maharaja is one of the senior disciples of His Divine Grace A.C Bhaktivedanta Swami Srila Prabhupada, founder acharya of ISKCON, the International Society for Krishna Consciousness. He holds a BA Degree in Oriental fine arts history from the University of British Colombia. He joined the Hare Krishna movement in India in 1970. Initiated in 1971 by Srila Prabhupada, he took sannyasa vows in 1984. Bhanu Swami was personally instructed in the art of Deity worship by Srila Prabhupada, and within ISKCON he has become an authority on the topic. He is a great inspiration for many devotees around the world and he preaches Krishna consciousness in Japan, Malaysia, Russia and India.

HH Bhanu Swami Maharaja met the disciples of His Divine Grace A.C. Bhaktivedanta Swami Srila Prabhupada in 1971 in Tokyo, just after his graduation in history. Srila Prabhupada was about to set on his India tour with his Western disciples and Bhanu Maharaja joined with them.

By 1972, His Holiness Bhanu Swami maharaja already earned credit from Srila Prabhupada for his exact Sanskrit pronunciation, expertise in cooking and excellence in deity worship. He also began to translate Srila Prabhupada’s books into Japanese.

Bhanu Swami has been a GBC member since 2003. His zonal assignments cover South India, and he is co-GBC for Japan. His history in management is as a regional secretary for South India since 1986. Having spent the last few decades in residence in Chennai, he has a clear understanding of the region. His GBC committee responsibilities include past chairmanship and, currently, participation in the Parallel Lines of Authority Committee for the Strategic Planning Initiative.

A scholar in Sanskrit and Bengali, Bhanu Swami has translated fifteen significant works of the Gaudiya Vaishnava canon, with six more titles in progress. Many of these works are commentaries from primary members of the Gaudiya sampradaya on theBhagavad-gita, Sri-Isopanishad, and Srimad Bhagavatam. Thus, Bhanu Swami’s contribution is a lasting one.

Bhanu Swami is a quiet achiever and has studied a variety of disciplines including martial arts, Reiki healing, Carnatic music (specifically vina). He is a reputed astrologer. His current efforts in spreading Krishna consciousness include completing the construction of a temple in Chennai and stabilizing the new temple in Tokyo.

Bhanu Swami’s depth of scholarship has enabled him to create presentations on topics like karma, reincarnation, yoga and Srimad Bhagavatam, and he presents these as he travels to select parts of the world, enlivening those he meets with heartfelt spiritual intellectualism.

He continues with this translation service to this day, giving us the nectar from the Bengali and Sanskrit works of the previous Vaishnava acharyas to enhance our understanding of the Gaudiya Vaishnava philosophy. He is also a member of the Governing Body Commission of ISKCON.

SB_11.17.10-Devotees can use principles of Varnashram to regulate, but emphasis should be on bhakti!

SB_11.17.1~9 - Devotees who follow or reject Varnashram is based on their preference & advancement !

SB_11.9.5~10 - Conclusion of all Vaishnava acharyas about association !

SB_11.9.3~4-Process of Bhakti is Lord's svarupa shakti, it makes one quickly & easily self realized! 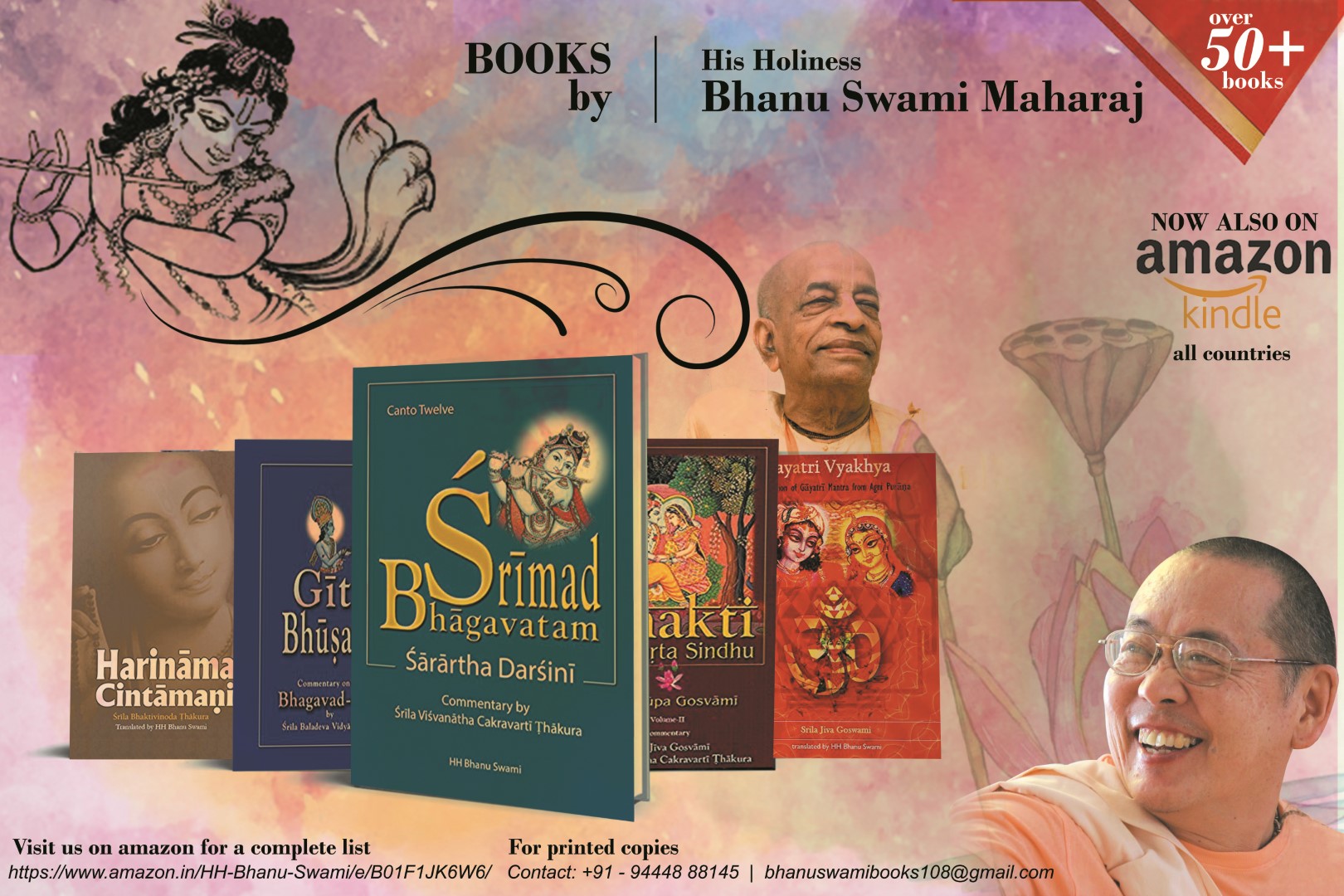