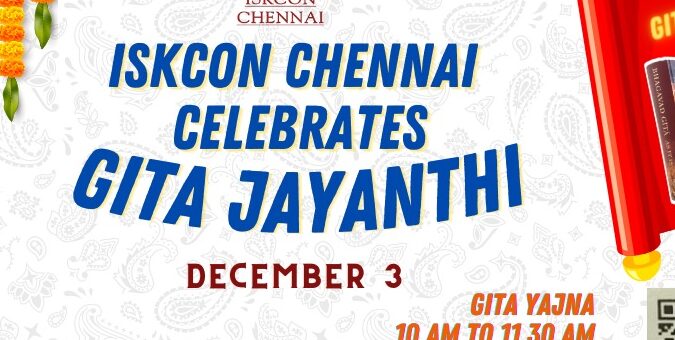 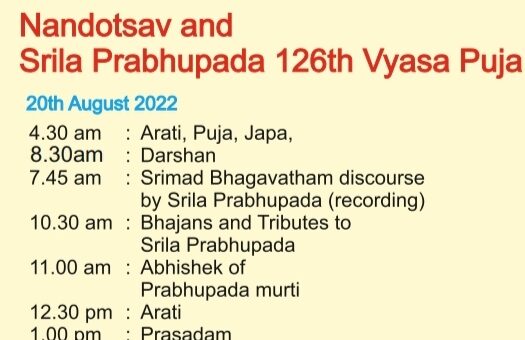 Srila Prabhupada 126th Vyasa Puja 20th August 2022     Srila Prabhupada, India’s Spiritual Ambassador to the West When His Divine Grace A.C. Bhaktivedanta Swami Srila Prabhupada entered the port of New York City on September 17, 1965 few Americans took notice — but he was not merely another immigrant. He was on a mission to introduce the ancient teachings of Vedic India into mainstream America.  Before Srila Prabhupada passed away on November 14, 1977 at the age of 81, his mission proved successful. He had founded the International Society for Krishna Consciousness (ISKCON) and saw it grow into a worldwide confederation of more than 100 temples, ashrams and cultural. 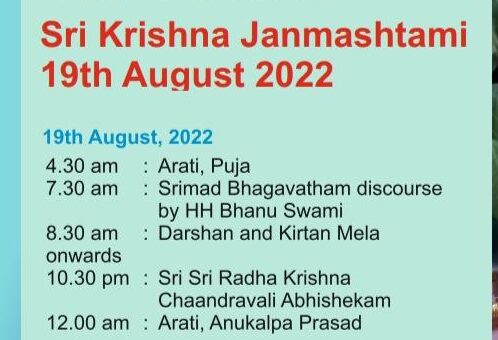 Sri Krishna Janmashtami 19th August 2022   Date: 19th August 2022, Friday Time: 8.30am to midnight   ISKCON Chennai invites one and all to celebrate Sri Krishna Janmashtami by visiting the Sri Sri Radha Krishna temple at Akkarai, Sholinganallur (off ECR) on 19th August 2022, Friday. The festival this year is marked with the 125th anniversary of ISKCON founder Acharya His Divine Grace A.C. Bhaktivedanta Swami Prabhupada.   On the 19th, darshan of Sri Sri Radha Krishna will commence at 8.30am. Throughout the day, there will be bhajans and kirtan. Facility to offer archana to the Lord is available in the temple from 9am to 10pm. Visitors will also be able to swing Balagopala on.

Balaram Purnima 12th August Balaram Purnima 12th August 2022 Program Time 6.15pm – Sandhya Arati 6.30pm – Discourse on Lord Balaram 7.00pm – Jhulan Yatra 7.30pm – Dahi-handi (breaking the pot) and prasadam   Balarama Purnima Who is Lord Balarama? The Supreme Personality of Godhead, Krishna, is the fountainhead of all incarnations. Lord Balarama is his second body. They are both one and the same identity. They differ only in form. Balarama is the first bodily expansion of Krishna, and He assists in Lord Krishna’s transcendental pastimes. He is the source of the entire spiritual world and is the adi-guru, the original spiritual master. He assumes five other forms to. 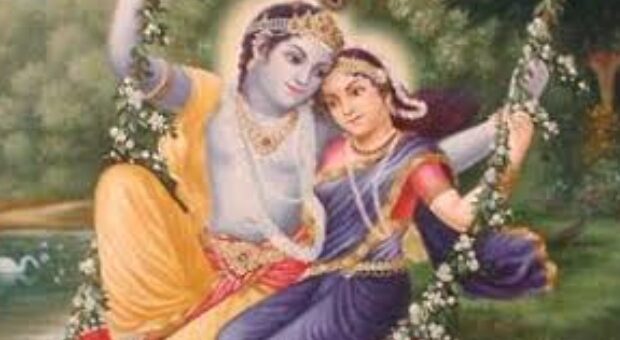 Jhulan Yatra 8-14 August Jhulan Yatra 8tb to 14th August Time 6.30pm – Sandhya Arati 6.45pm – Jhulan Yatra 14th August Sunday Special Jhulan at 12.30pm     Jhulan Yatra Jhulan yatra is that very special festival where each and everyone present can render personal service to Sri Sri Radha Krishna by swinging them.  One of the most popular events in the holy town of Vrindavan, India – where Lord Krishna appeared 5,000 years ago – is the celebration of Jhulan Yatra, the Radha-Krishna swing festival. In Sri Vrindavan for five days, in many of the 5000 temples there, the small Utsav-vighraha functional Deities (Vijay-utsav bera) are taken from the. 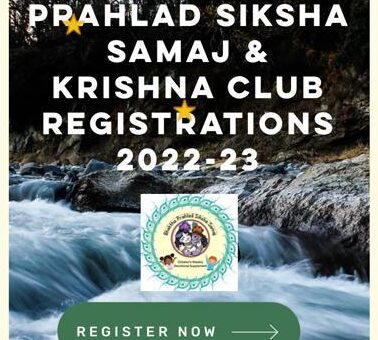