The Appearance Day of Radha Kunda 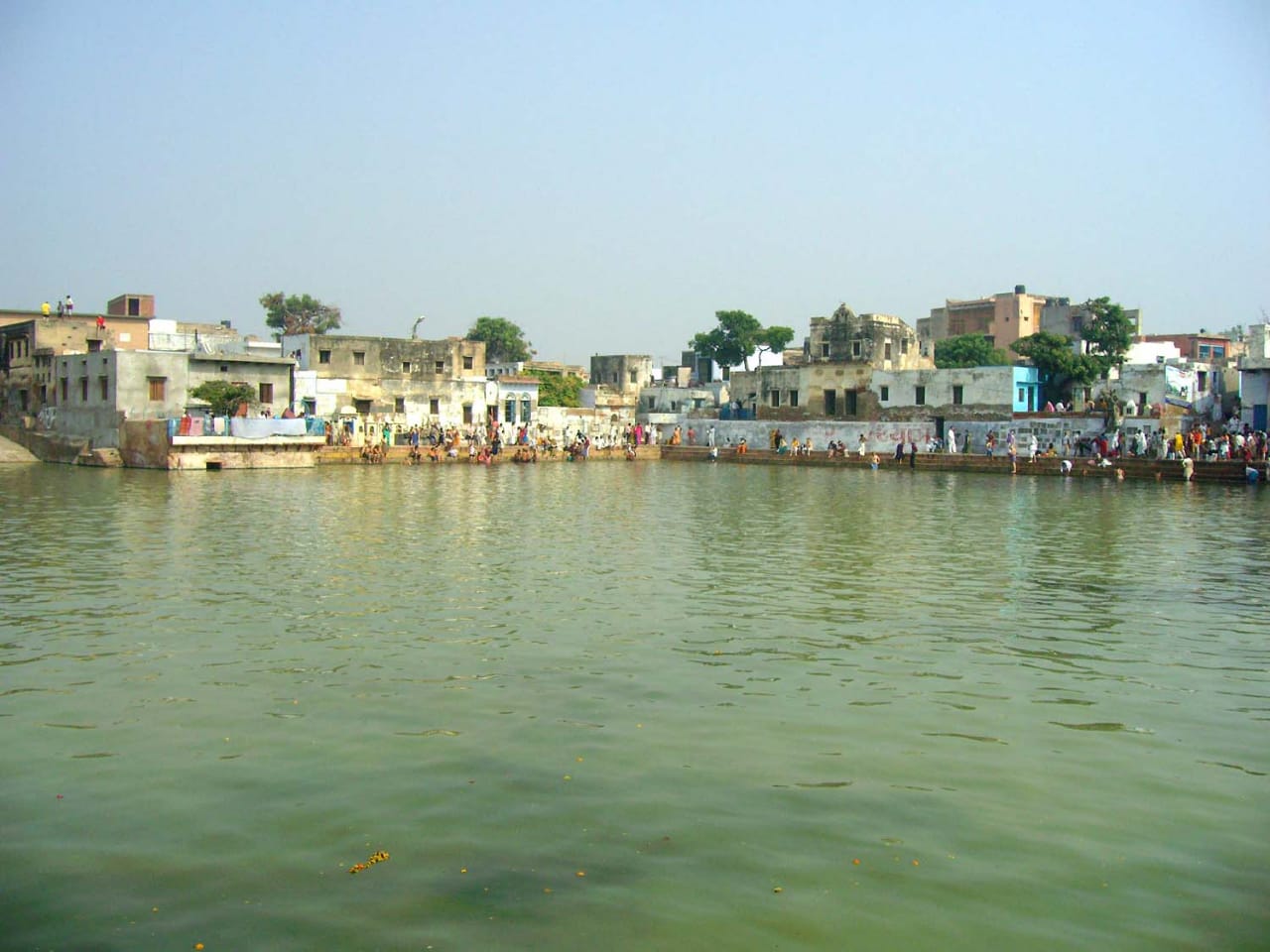 This day is quite special because this is also celebrated as Radhakund’s appearance day by people who live in Braj.

Srila Rupa Goswami is one of the main out of all the six Gaudiya Vaishnava Goswamis in Vrindavan. He writes about the glory of Radhakund in his famous treatise called Upadesha Mrita.

HOW AND WHEN RADHAKUND APPEARED?

Mathura’s holy land is said to be the best from divine Vaikuntha Dham because at this place supreme Lord was incarnated. The divine forest of Sri Vrindavan is superior to Mathura because lord Krishna composed his Rasalila there. Govardhan Mountain is more superior to Vrindavan because lord Krishna lifted it from his divine hands and this place is one of his various romantic pastimes and amongst all these places the supreme place is Sri Radhakund because it is filled with the nectar of the love of Lord Krishna. Now, who will be that acumen to not be interested in serving this divine RadhaKund situated at the foothills of Govardhan Mountain?

Lord Krishna is a “Gwal Bal”. He is the son of the great king and Yashoda. He is loved by all the people of Braj. He is a supreme god. 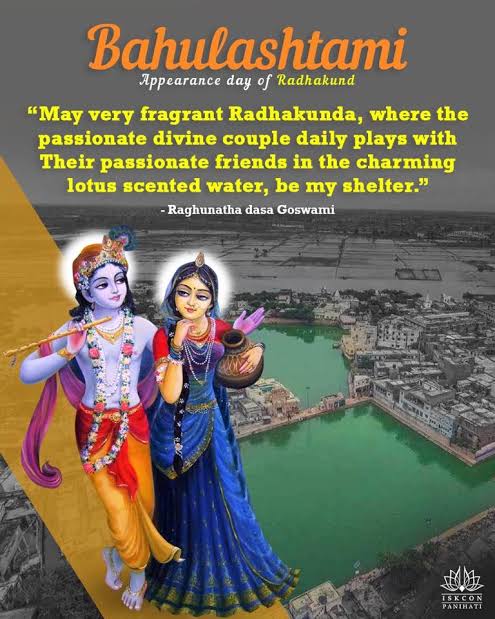 THE STORY OF LORD KRISHNA’S BRAVERY

It is said that Lord Krishna before having his breakfast used to kill one demon every day which was sent by Kamsa.

One time Kamsa sent a demon named Arishta to kill Lord Krishna to Braj. Arishta’s demon was in the form of a bull and he was appearing huge and frightening. He started creating a mess just after his arrival and as soon as he saw Lord Krishna, he attacked him. The Supreme Lord Krishna is the king of all the powers. Lord Krishna grabbed him by his horns and slammed him hard. The demon got tired and was dripping from all the sweat but still, he got up with courage and attacked lord Krishna and then again lord Krishna held him by his horns and slammed him hard on the surface and killed the demon this time. After killing the Arishta demon, Lord Krishna went to Govardhan Mountain to meet gopis.
Sri Radha and all the Gopis jokingly said to lord Krishna that they cannot accompany him anymore because he has killed a bull and Bull is a symbol of religion. That is why he has sinned.

And if they will accompany him they will also get infected by that sin. If he wants to cleanse himself from sin then he will have to take bath in the holy rivers of all the pilgrimages of this entire universe. To make his devotees happy. Lord Krishna said that he doesn’t have to go anywhere, and he will call all the pilgrimages here and by the will of Krishna, all the holy rivers appeared before the Lord and were ready to serve him.

Then lord excavated a hole on the land with his heel and all the rivers in their liquid forms like Ganga, Yamuna, Saraswati, Narmada, Kaveri etc entered in that pool.
Then Lord Krishna took a bath in that pool and after taking bath he said to all the Gopis that he is now clean by taking a bath in this pool but, you all took sides of that demon that is why you are all contaminated from the sin. You must take a bath in this pool to get cleaned from the sin. Gopis said that your pool has now been infected by the killing of that bull and that’s why we will not enter your pool but since we all accompanied you that is why we too have become corrupted by the conspiracy of killing the bull. We should also clean ourselves by taking a bath.

-Efforts made by all the Gopis and Radha

Then Princess Radha and all the Gopis saw a big hole made by one huge body part of arishtasur and then they all started digging the hole from their bangles, when it took a shape of a pool then all the Gopis from Mansi Ganga started pouring water from the pitchers into this pool by making a big line. When Krishna saw his other devotee’s gopis performing such a hard task he could not tolerate it. He called all the rivers and asked them to request Radharani, then all the holy rivers prayed personally to Radharani and begged for grace to let them provide help to all of them and let them fill water in the pool. Radharani then accepted the help and then the water from Shyam Kund went to Radha Kund. Thus, Radha Kund appeared.
Srila Prabhupada, Who is the founder Acharya of  ISKCON. He writes in the context of verse no. 10 of updeshamrita that Srimati Radharani is the supreme devotee of Lord Krishna and her kund Sri Radhakund is the holiest place. This is confirmed by an example from the Laghu Bhagavatamrta.

THE NEVER-ENDING LOVE OF LORD KRISHNA AND RADHA

The way Radharani is loved by Lord Krishna. The place of her bath is also equally (Radhakund) loved by him. Out of all the Gopis, she is the one who is loved by the lord the most.

After sometime when the lord went back to Vrindavan then Radhakund and Shyam Kund according to the wish of the Supreme Lord, became unacquainted.

After this, almost 500 years before, Lord Chaitanya appeared as the most merciful incarnation.

Sri Chaitanya is Lord Krishna himself and in the spirit of Radharani.
Lord Chaitanya & Radha-Krishna, are not different. Sri Chaitanya Mahaprabhu has appeared to establish Yuga dharma Harinama Sankirtana and to invoke the love of Radharani. When Chaitanya came to travel to Vrindavan then he discovered Radha Kund and Shyam Kund and at that time they were all known as the Gauri river and black river and were unacquainted with regular people. Later Raghunath Das Goswami excavated them and worshipped Radhakund. Goswamis have mentioned Radhakund’s mercy in many of their books.

On the auspicious occasion of BAHULASHTAMI, the Radha Kund which is the liquid form of Radharani and is filled by the love of Lord Krishna, pray that our contaminated heart gets cleaned up, we all achieve the supreme love of Lord Krishna and we all join in divine loving service of Radha-Krishna. 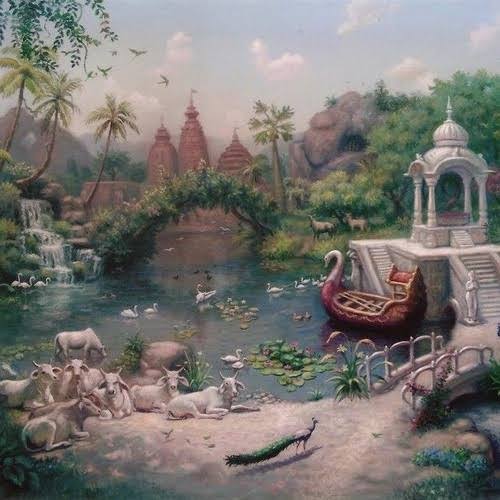