Chennai, India—The ISKCON Communications Ministry hosted the Fifth Annual Vaishnava Christian Dialogue in India, December 16-18. The Dialogue is part of a global effort by the Ministry to promote understanding between members of ISKCON and other major religious communities.

Previous dialogues were held in Tirupati, India. This one was held at ISKCON’s temple in Chennai, the capital city of Tamil Nadu.

In India, the dialogue takes the form of a three-day meeting between Gaudiya Vaishnavas, Sri Vaishnavas, Catholic Christians, and Protestant Christians. Twenty-three participants attended including professors, priests, ministers, nuns, sanyasis, temple presidents, and other religious leaders. All participants are people of faith, in addition to their academic qualifications.

“Our Founder-Acarya, Srila Prabhupada, said publicly on multiple occasions that it doesn’t matter whether one is a Christian, Muslim or Hindu, what matters is whether or not one is developing love of God,” said Anuttama Dasa, ISKCON GBC Member and Minister of Communications. “For me, that forms the foundation of our dialogues, knowing that Vaishnavas as well as Christians are trying to awaken love of God; so we want to learn about each other, and from each other.”

The dialogue follows a similar format every year. The event opened on the first evening with a reception, opening remarks, and dinner. Day two began in the morning with academic papers on the chosen topic. For 2019, the opening Catholic paper was presented by a Professor of Christian Studies who also holds a Master’s Degree in Vaishnavism. That was followed by the Gaudiya Vaishnava paper, written by Urmila devi dasi (Dr. Edith Best).

A second set of papers was presented in the afternoon of day one. The first afternoon paper was written by a Protestant Ph.D. candidate, and other by a representative of Sri Vaishnavism. In total, four papers were presented during the day, one from each of the four religious traditions represented.

A group photo of the conference participants.

After each paper of approximately 5,000 words each, a discussion ensued among the participants questioning, comparing, and dissecting each written offering. The 2019 topic, “Loving Surrender and Social Action” brought out a variety of analyses. The Vaishnava and the Protestant papers focused in greater detail on the first part of the theme, Loving Surrender, building upon Biblical and contemporary sources for the Christians, and original Sanskrit texts and more contemporary acaryas for the Vaishnavas.

The Catholic paper in particular drew attention to the Christian call to “love one’s neighbor” as a core commandment. “A human’s relationship with God the Father and his relationship with his brother are so linked together” says the Vatican II document Nostra Aetate, “that scripture says ‘one who does not love does not know God.’”

Anuttama Dasa responded in a summary report, “I thank our Christian friends for bringing clarity to their conviction that to love God means we must care for the ‘least among us.’ That is an important reminder for Vaishnavas. While we too, are directed to be “unhappy to see the distress of other living beings and happy to see their happiness” (Bhagavatam, 6.10.9) I appreciate the reminder to apply this principle in our day to day lives.”

Sister Theresa (center) appreciates the gift of a Bhagavad-gita As It Is, from Padma (left) and Rukmini (right)

Day three of the dialogues began with a Catholic Christian worship/prayer service, led by a Jesuit priest. He read from the Gospels and sang hymns and also a bhajan he had composed glorifying God. That was followed by a Gaudiya Vaishnava service. Members were welcome to participate in or observe the two services per their level of comfort.

Professor Ravi Gupta (Radhika Raman Das), while leading the Vaishnava service explained the concept of Deity worship, led the group in chanting the maha-mantra and other prayers, and read verses from the Bhagavad-gita. After the services more discussions ensued followed by a planning session for the 2020 dialogue.

Perhaps the most important aspect of the dialogues are the deep friendships that have developed over the last five years. During meals and between sessions, participants share thoughts on religious questions, personal spiritual insights, and challenges of the day.

Rukmini devi dasi, a senior disciple of Srila Prabhupada comments, “What I find most inspiring about these dialogues is the honest sharing among participants about their realizations and struggles in following their chosen religious path.” 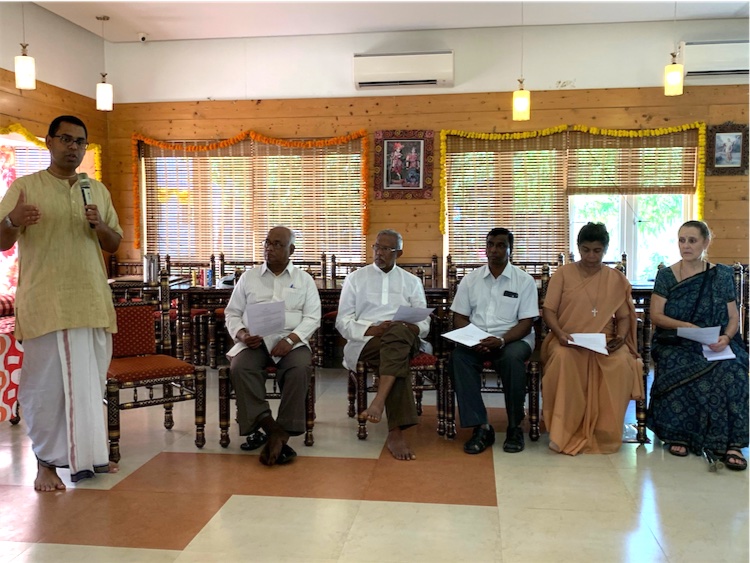 An elder Sri Vaishnava participant afterwards wrote, “The Three Day Forum was a motivating factor and made me understand with a humiliating exposure that “one has to learn a lot” at any stage of life.”

Anuttama summed up the event in this way, “I hope people note that in the midst of this age of Kali (Quarrel), at time of national and global strife and misunderstanding, how a small group of Vaishnavas and Christians come together each year for several days of friendship, academic study, and spiritual experience. That we open our hearts, learn from each other, appreciate each other, grow with each other, and go away with deepened faith, and a deeper commitment to our own faith tradition, as well as an appreciation of how the Supreme Lord calls and engages others.”

For 2020, the dialogue members will examine a pressing global issue from their spiritual perspectives: “Inner and Outer Climate Change: God, Nature and Human Transformation.”

At the end of the session, participants were gifted a Bhagavad-Gita As-it-Is. Three of the scholars from Christian colleges gratefully accepted a full set of Srimad Bhagavatam volumes to be placed in their university libraries.