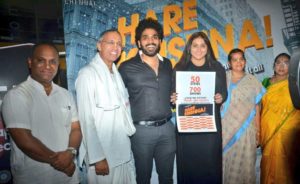 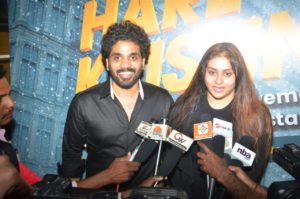 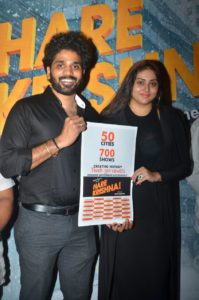 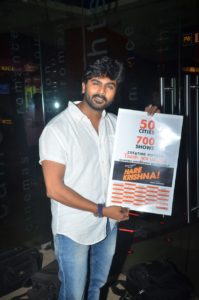 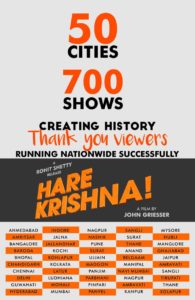 Hare Krishna! All glories to Srila Prabhupada. Thank you so much for showing your love for Srila Prabhupada, the savior of the whole world. In just twelve hours all 1039 tickets for 15, 16 and 17 have been sold out.

Those of you who missed booking the tickets now, please don’t worry. Booking will open again on Saturday, December 16 and you can book for shows from December 18-21.

It’s also an opportunity for those who want to see the movie again to book on 16th.

Thank you! We hope we keep the movie running like a block buster! Hari bol!

New Delhi: Internationally acclaimed film “Hare Krishna” , based on the life and works of the founder of International Society for Krishna Consciousness (ISKCON) A.C. Bhaktivedanta Swami Srila Prabhupada, will be released in India on December 15.

The film, which has participated in many international film festivals and won awards, is being released in India both in English and Hindi by Rohit Shetty of Aurous Avatar Entertainment all across PVR Theatres and other multiplexes on December 15, 2017.

The film shows how, at the age of 70, Indian Swami Shrila Prabhupada went to America to spread the love of Krishna without any support or money in his pockets, despite all difficulties and obstacles, his unflinching determination and faith ignited a worldwide spiritual phenomenon, now known as the “Hare Krishna Movement”.

“Hare Krishna :The Mantra,The Movement and The Swami Who started it all” will be released in India on 15th Dec 2017 both in English as well as Hindi Language.

Its a breathtaking as well as heartwarming tale about how a 70 year old man, without any help, with barely any money, travelled alone on a cargo ship to the US. After suffering 2 cardiac arrests enroute, he reached the US after 37 days.  In a small storefront in New York, where the youth would take pride in being hippies, he started a worldwide mission and transformed lives of millions all over the world. Popularly known as Hare Krishna movement today, its philosophy traces its roots back to the divine teachings of Lord Krishna in the Bhagavad Gita.

A must watch for all, who want to know potency of faith in God and how it empowers one to transcend most challenging situations in life, ultimately helping one to attain life’s ultimate fulfilment.

This is a true story of a hero, AC Bhaktivedanta Swami Prabhupada who made the impossible happen, all in service to Lord Krishna.

“The film shows this extraordinary legendary saint, scholar and religious leader in a different perspective for his efforts in the 1970s for getting the misguided youths on the right path” said Rohit Shetty.

Directed by John Griesser from Hollywood “Hare Krishna” provides an uplifting spiritual experience, regardless of one’s beliefs or personal religion”.

Speaking about the film, Radhanath Swami, ISKCON Spiritual leader said “As a sociological, philosophical, or religious study, Srila Prabhupada’s life story stands tall as an exceptional contribution to the life of millions of people and to the world.

He was a boon for the drug addicted hippies who later became his followers and walked on the Krishna way yet Srila Prabhupada himself remained in the background, without personal desire.

The spellbound story of Prabhupada and his life will make the audience wonder how the world has largely missed this saint who so recently walked among us”.

Srila Prabhupad had a dream to build a home where world can live, and he did it.
Today, he has millions of devotees and 700 ISKCON temples worldwide.

‘The film “Hare Krishna” shows that Prabhupada’s disciples all across the globe speak the same language of humanity and have compassion towards every living being in this creation and follow the same life style and belief.

The entire film revolves around the life of this soul, immersed in pure love for Lord Krishna,’ added Radhanath Swami .

The film is a result of years of hard work by Hollywood filmmaker John Griesser, who was inspired by Prabhupada.

It offers a wonderful experience of seeing and hearing from Prabhupada and assimilating his teachings — his heartfelt words of wisdom.

“Hare Krishna — The Mantra, the Movement and the Swami who started it all” was initially aimed at the Western public but with its growing popularity and demand we decided to release the film all over the World including India,’ John Griesser said.

‘Hare Krishna’ was first released on June 3, 2017 in North America and October 1 internationally.

The film has been released in several international markets such as USA, Australia, Russia, Ukraine, Canada and Israel.

It has been released in 164 cities across the world so far.

‘Hare Krishna’ was the number 1 docudrama film in America for box office earnings on the opening weekend.

This film has been released in English, Hindi (dubbed), Spanish, Russian and Portuguese languages all over the world except India and has been subtitled in more languages.

Chant Hare Krishna
And your life will be sublime!

A documentary, Hare Krishna! The Mantra, the Movement and the Swami who started it all was launched at the Illuminate Festival and won the coveted 2017 Feature Competition Jury Prize in the United States.

Since then, it is on a ‘sold out’ streak and continues to captivate audiences.

This movie is hitting the Indian theares on December 15. While 15 cities of India will see the film in Hindi, in Chennai, the original English version will be screened at the PVR theatres. Kindly fill in the survey above to help PVR fix the screening theatre, date and time. Thank you! 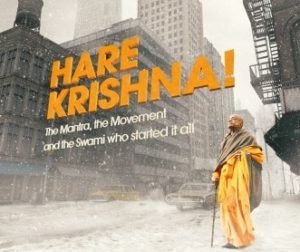