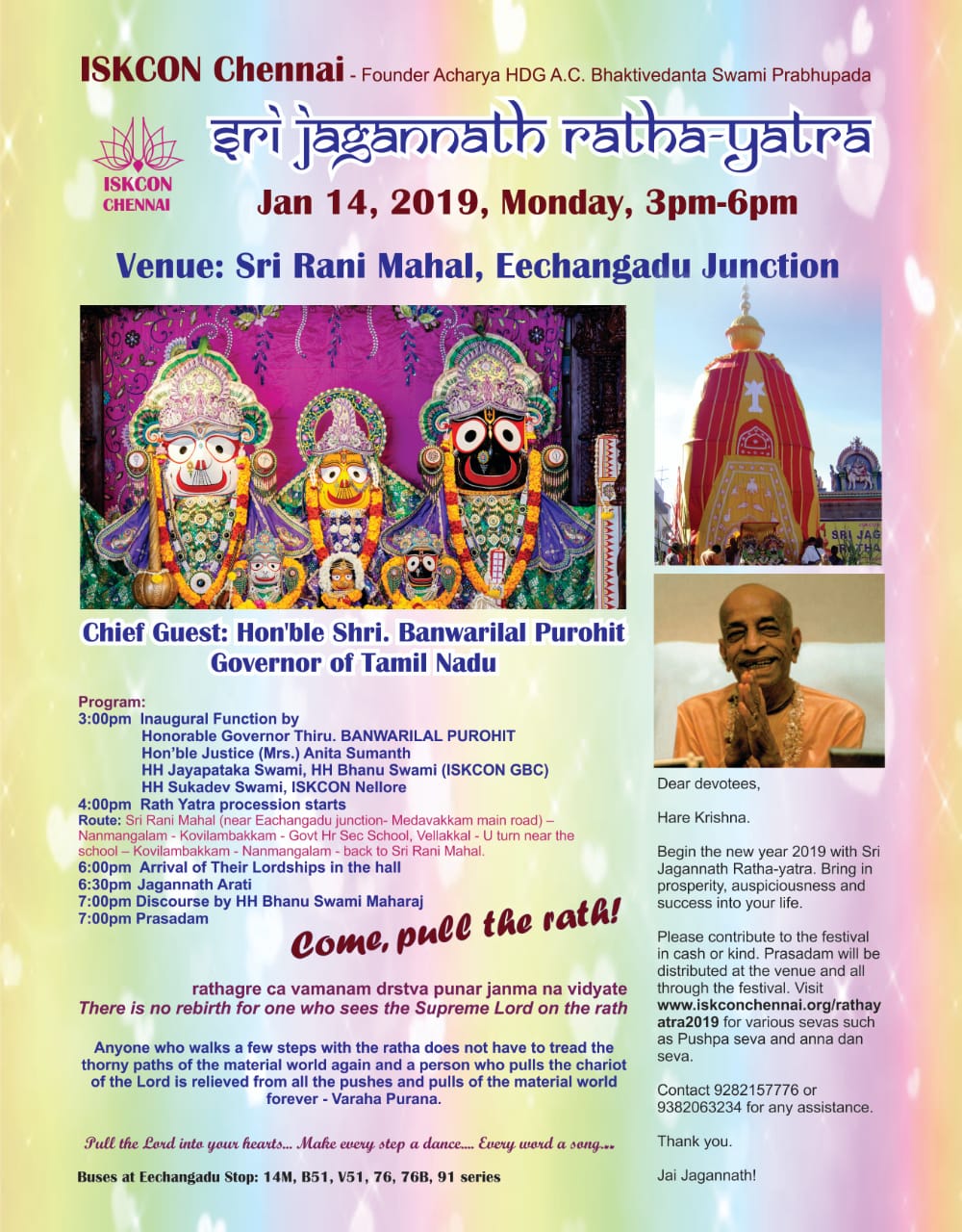 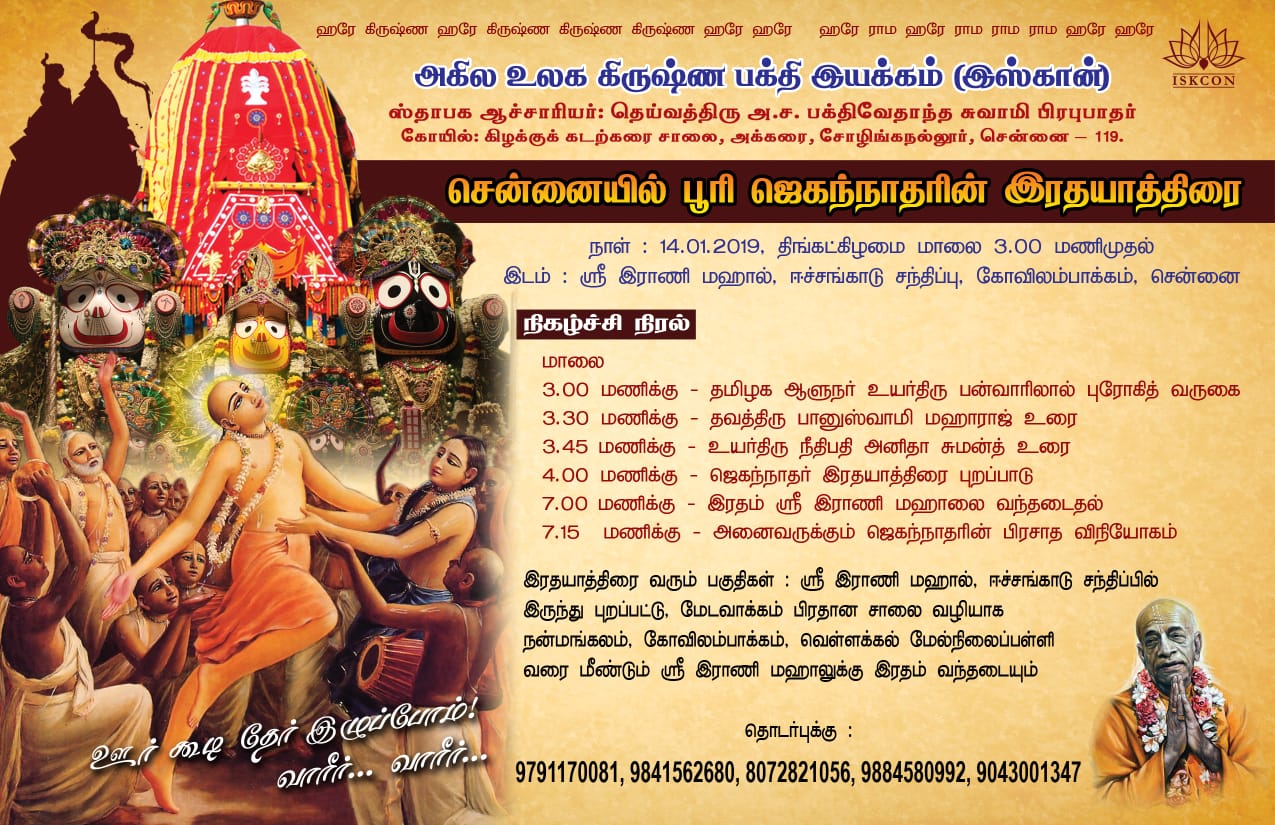 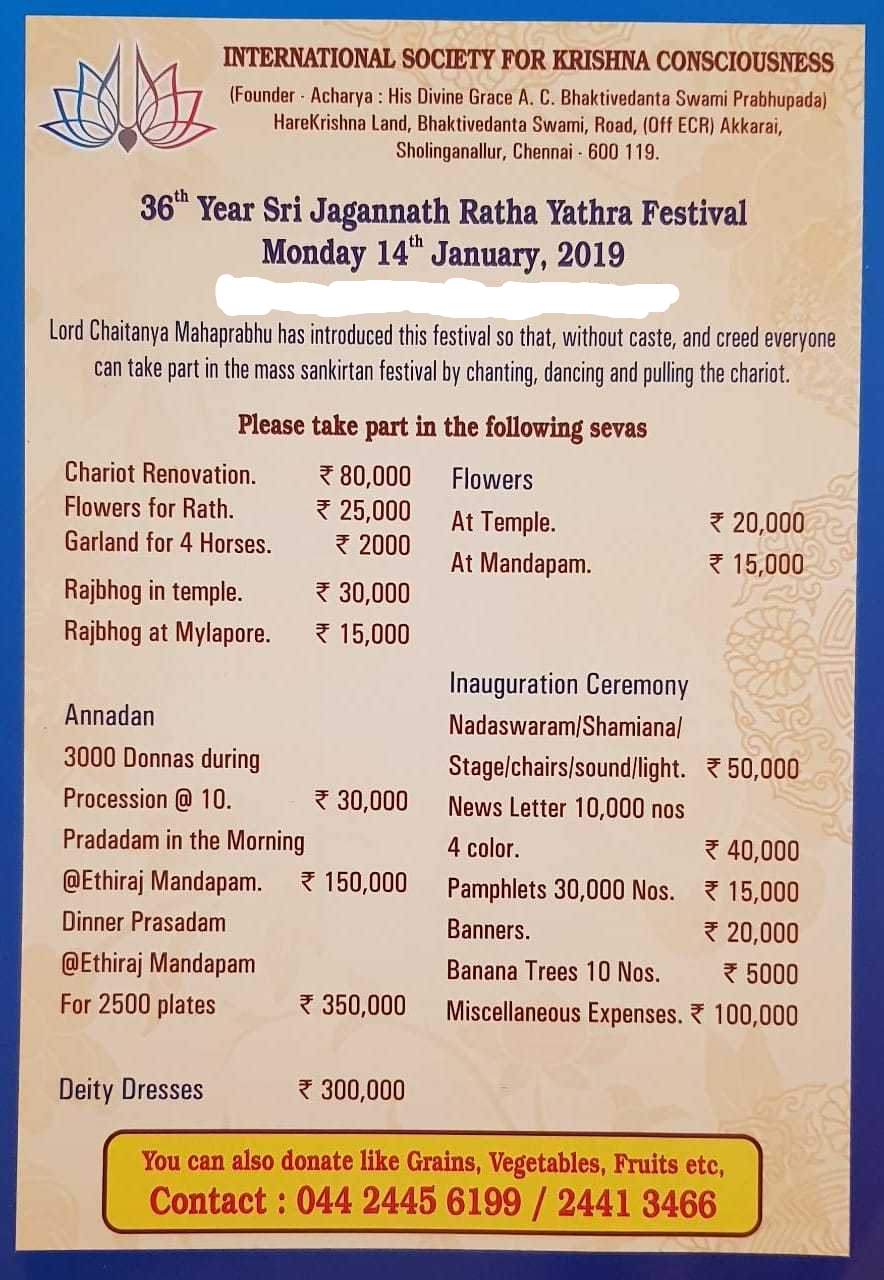 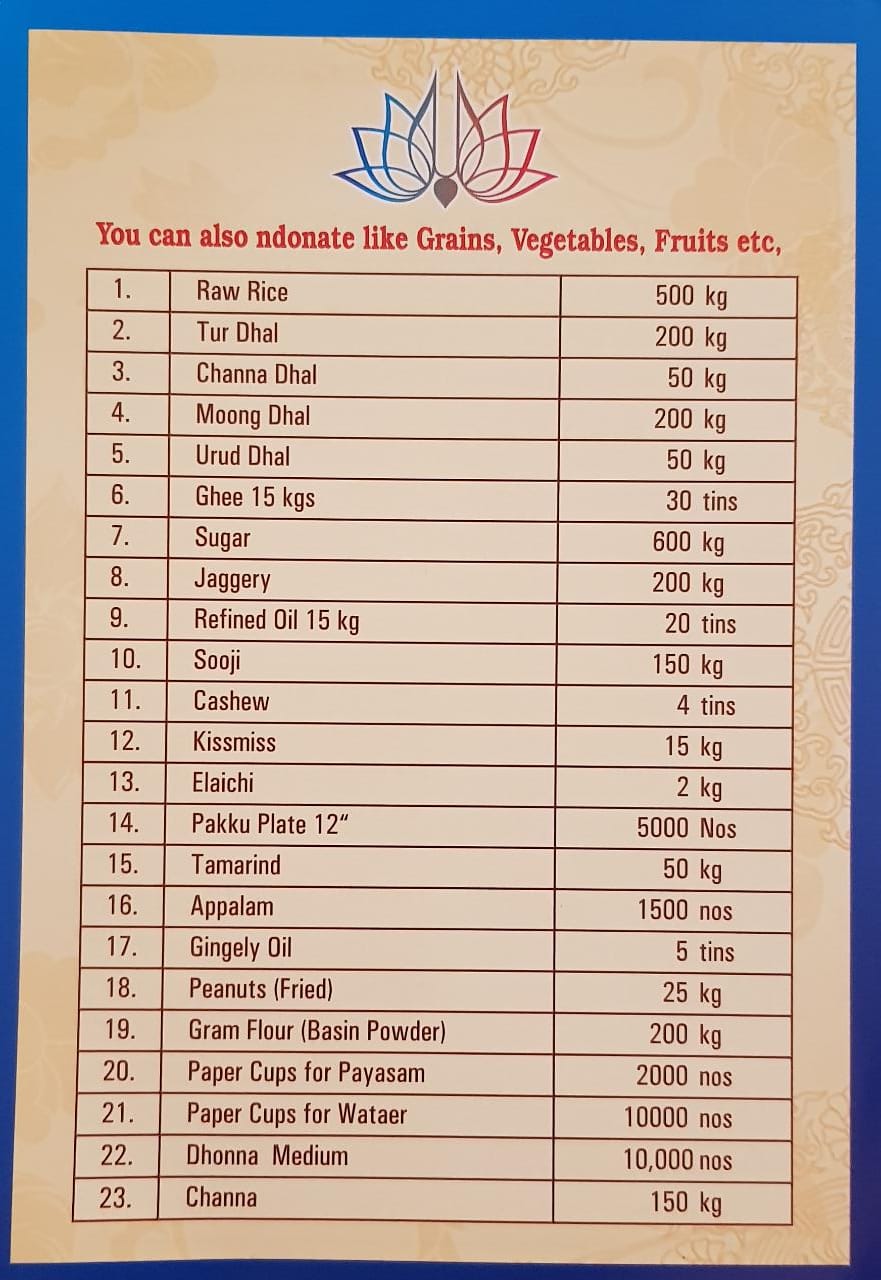 Bus Stop Name : Get Down at Eachangadu Bus Stop

Option 1: From St Thomas Mount railway station M-14 bus available for every 5 minutes starting point of the bus  (this is the best  choice of the  devotees who will travel by local Train/bus)
Option 2: From  T.Nagar bus stand  to Tambaram East Bus B 51 & to Tambaram West V 51

Option 6: From Anna Nagar take Metro  get down at St Thomas Mount and follow option 1

Option 7: From Central  or Egmore take local train or Metro get down at St Thomas Mount and follow option 1

Option 8: From Tambaram to Tiruvanmiyur via Pallavaram-Thuraipakkam 200 feet radial road  91 series all buses

Option 10: From Sholinganallur Bus No.  95 upto Medavakkam koot Rood. From there follow option 3.

The spiritual significance of Jagannath Ratha-yatra

The meaning of the Ratha-Yatra parade is steeped in religious sentiment. The form that Lord Krishna takes as Jagannatha is the manifestation of His ecstasy that He feels when He leaves the opulence of His palaces in Dwaraka, represented by the Puri temple, to return to the town of Vrindavan and the simple and pure spontaneous love the residents there have for Him. Thus, there is no difference between Lord Krishna and Lord Jagannatha. So in the mood of separation from His loving devotees, Jagannatha mounts His chariot and returns to Vrindavan, which is symbolically represented by the Gundicha temple. In this way, the esoteric meaning of the Ratha-Yatra parade is that we pull the Lord back into our hearts and rekindle the loving relationship we have with Him. Many great poems and songs, such as Jagannatha-astakam, have been composed describing the event and the highly ecstatic devotional mood one can enter while participating. Many verses are also written in the Caitanya-caritamrita that describe the pastimes Sri Caitanya Mahaprabhu had during these Ratha-Yatra festivals 500 years ago.

To explain the internal meaning of Ratha-Yatra further, Lord Jagannatha is the embodiment of Lord Krishna’s love for Srimate Radharani. While Lord Krishna was living in Dwaraka, he felt great separation from Radharani and the residents of Vrindavana. On the day of one solar eclipse, He traveled to Kuruksetra with His brother Balarama and His sister Subhadra on His chariot. There He met Srimate Radharani and other residents of Vrindavana, all of which wanted to take the Lord back to Vrindavana. While traveling and thinking of this meeting, He entered mahabhava, the highest sentiments of loving exchange. In that state, His eyes dilated like fully bloomed lotuses, and His hands and legs retreated into His body. In this way, the form of Lord Jagannatha is called radha-viraha-vidhura, the separation from Radharani, and also mahabhava-prakasha, the manifestation of mahabhava for Radharani. Lord Caitanya was the embodiment of Srimate Radharani’s love for Lord Krishna. So Lord Caitanya taking Lord Jagannatha from the main temple to the Gundicha corresponds to Srimate Radharani’s wanting to take Lord Krishna from Dwaraka back to Vrindavana, the place of spontaneous and ecstatic love of God.

It is also explained that by participating in this festival, chanting and dancing, or helping pull the ropes of the chariots, one becomes free of many lifetimes of karma. One can even become liberated due to the spiritual potency of Lord Jagannatha’s presence. One of the ways this happens is explained as follows: at the very end of one’s life when the memories of his activities pass through the mind, when he remembers the amazing Ratha-Yatra festival his mind stops and focuses on that event. Thus, he dies thinking of Lord Jagannatha and is liberated from material existence and returns to the spiritual world, just like a yogi is transferred to the spiritual strata when his mind is fixed on the Supersoul at the time of death. This is why thousands of pilgrims come to Jagannatha Puri every year for Ratha-Yatra.