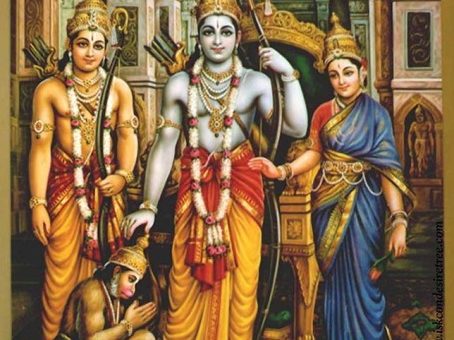 The Glorious Pastimes of Lord Rama

The Tenth Chapter of the Ninth Canto of Srimad Bhagavatam describes how Lord Ramachandra appeared in the dynasty of Maharaja Khatvanga. It also describes the Lord’s activities, telling how He killed Ravana and returned to Ayodhya, the capital of His kingdom.

The son of Maharaja Khatvanga was Dirghabahu, and his son was Raghu. The son of Raghu was Aja, the son of Aja was Dasaratha, and the son of Dasaratha was Lord Ramachandra, the Supreme Personality of Godhead. When the Lord descended into this world in His full quadruple expansion-as Lord Ramachandra, Lakshmana, Bharata and Satrughna, great sages like Valmiki who were actually in knowledge of the Absolute Truth described His transcendental pastimes. Srila Sukadeva Gosvami describes these pastimes in brief.

In the arena of the sacrifice performed by Visvamitra, when He was just a young boy Lord Ramachandra, helped the great sage by killing Subahu and striking Marica, the she-demon, who was disturbing the sages in their daily discharge of duties.

In the assembly where mother Sita was to choose her husband, in the midst of the heroes of this world, He broke the bow belonging to Lord Siva. Thus the Lord achieved the hand of mother Sita, who was indeed the goddess of fortune who constantly rests on the chest of the Lord. While returning from Sita’s home, Lord Ramachandra met Parasurama. Although Parasurama was very proud, having rid the earth of the royal order twenty-one times, he was defeated by the Lord, who appeared to be a ksatriya of the royal order.

Maharaja Dasaratha had three wives. One of them, Kaikeyi, served him very pleasingly, and he therefore wanted to give her a benediction. At the time of the coronation of Prince Ramachandra, Kaikeyi requested her husband to enthrone her son Bharata and send Ramachandra to the forest. Maharaja Dasaratha, being bound by his promise, ordered Ramachandra to go to the forest. And the Lord, as an obedient son, accepted the order immediately and entered the forest, accompanied by Lakshmana and Sita.

While wandering in the forest, where He accepted a life of hardship, carrying His invincible bow and arrows in His hand, Lord Ramachandra deformed Ravana’s sister, who was polluted with lusty desires, by cutting off her nose and ears. He also killed her fourteen thousand Raksasa friends, headed by Khara, Trisira and Dusana. When Ravana, who had ten heads on his shoulders, heard about the beautiful and attractive features of Sita, his mind was agitated by lusty desires, and he went to kidnap her. Ravana’s kidnapping of Sitadevi was the beginning of this demon’s misfortune. When Marica assumed the form of a golden deer, Lord Ramachandra went to bring the deer to please Sitadevi, but in the meantime Ravana took advantage of the Lord’s absence to kidnap her.

When Ravana kidnapped Sita, he was obstructed on the way by Jatayu, a large bird. But the powerful Ravana defeated Jatayu in the fight and cut his wing. When Ramachandra was searching for Sita, He found Jatayu almost dead and was informed that Sita has been carried off by Ravana. When Jatayu died, Lord Ramachandra did the duty of a son by performing the funeral ceremony.

Then the Lord killed the demon Kabandha and the commander Vali and established a friendly relationship with Sugriva. After organizing the military strength of the monkeys He went with them to the shore of the sea. Then Samudra came to the Lord and surrendered to Him, wanting to help Him in every way. Samudra told that his water will present no impediment to Lord’s going to Lanka, but requested Lord Ramachandra to construct a bridge over it to spread His transcendental fame.

Great mountain peaks covered with trees and plants were thrown into the sea by the monkey soldiers and began to float by the supreme will of the Lord. Thus constructiong the bridge, with the direction and help of Vibhisana, Ravana’s brother, the Lord, along with the monkey soldiers, headed by Sugriva, Nila and Hanuman, entered Ravana’s kingdom. Previously, Hanuman, the eternal servant of the Lord, had set fire to Lanka, and now, the entire city of Lanka was disturbed by the monkey soldiers. When Ravana saw these, he called for Nikumbha, Kumbha, Dhumraksa, and other Rakshasas and also his son Indrajit. Thereafter he called for Prahasta, Atikaya, Vikampana and finally Kumbhakarna. Then he induced all his followers to fight against the enemies.

Lord Ramachandra, surrounded by Lakshmana and monkey soldiers attacked the soldiers of the Rakshasas, who were fully equipped with various invincible weapons. But because the soldiers of Ravana were condemned by the curse of mother Sita, the monkeys were able to kill them simply by throwing stones and trees. Lord Ramachandra rebuked Ravana for his shameful act and then He fixed an arrow to His bow, aimed at Ravana, and released the arrow, which pierced Ravana’s heart like a thunderbolt. Ravana, vomiting blood from his ten mouths, fell from his airplane and was thus killed.

Then in accordance with Lord Ramachandra’s order, Vibhishana ruled Lanka. The Lord delivered Sitadevi from the Asoka forest and carried her in a flower airplane to His capital Ayodhya, where He was received by His brother Bharata. After Lord Ramachandra, accompanied by Lord Lakshmana and mother Sitadevi, met all His relatives, the great sage Vasistha enthroned Him as King and Lord Ramachandra ruled Ayodhya. He cared for the citizens exactly like a father, and the citizens, being fully engaged in their occupational duties of varna and asrama, accepted Him as their father. Lord Ramachandra became King during Treta-yuga, but because of His good government, the age was like Satya-yuga. Everyone was religious and completely happy.

During the reign of Lord Ramachandra the forests, the rivers, the hills and mountains, the states, the seven islands and the seven seas were all favorable in supplying the necessities of life for all living beings. When Lord Ramachandra, the Supreme Personality of Godhead, was the King of this world, all bodily and mental suffering, disease, old age, bereavement, lamentation, distress, fear and fatigue were completely absent. There was even no death for those who did not want it. All these facilities existed because of Lord Ramachandra’s presence as the King of the entire world. A similar situation could be introduced immediately, even in this age called Kali, the worst of all ages. It is said, kali-kale nama-rupe Krishna-avatara: Krishna descends in this Kali-yuga in the form of His holy name—Hare Krishna, Hare Rama. If we chant offenselessly, Rama and Krishna are still present in this age. The kingdom of Rama was immensely popular and beneficial, and the spreading of this Hare Krishna movement can immediately introduce a similar situation, even in this Kali-yuga.