ISKCON Chennai Jaganath Ratha Yatra 23rd June 2020 , 4.30 pm   ISKCON Chennai Celebrates Rath Yatra on June 23, 2020 4.30 PM (IST) ONE WHO SEES THE SUPREME LORD ON THE RATH NEVER TAKES BIRTH ISKCON Chennai conducted the Ratha-yatra of Their Lordships Sri Sri Jagannath Baladev Subhadra in a small scale on 23rd June in the evening. The Deities placed in their small rath was taken in two circles around the temple premises. Only the temple residents participated in the festival. As usual, the ratha-Yatra was accompanied by devotional singing. Various delicacies were offered to Their Lordships during and after the Ratha-Yatra. Arati was also offered at the.

ISKCON Chennai online weekly classes for children Hare Krishna! Jai Srila Prabhupada!   ISKCON Chennai is starting the yearly program for children from 22nd June 2020. Classes will be held online and Google classrooms will be used for posting material (pdf, videos and audios). Weekly once online classes will be held, of at least one and a half hours duration. We have 40 trained and registered teachers to handle the classes. Your child will be allocated under a teacher based on your preferred days and timings for the online classes. This information is collected in the registration form. The topic for children aged 6-12 is Mystical Mountains. Children will learn.

ISKCON CHENNAI TEMPLE CLOSED FOR PUBLIC DARSHAN DUE TO COVID 19 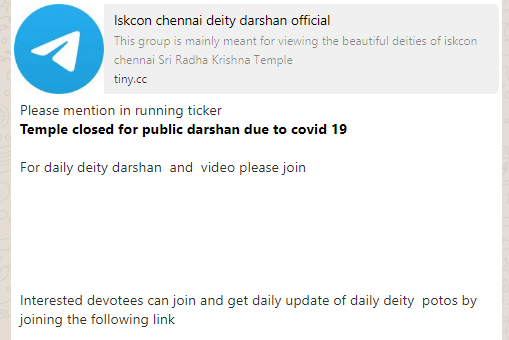 ISKCON CHENNAI TEMPLE CLOSED FOR PUBLIC DARSHAN DUE TO COVID 19 For daily deity darshan and video please join Interested devotees can join and get daily update of daily deity potos by joining the following link http://tiny.cc/kfnmoz